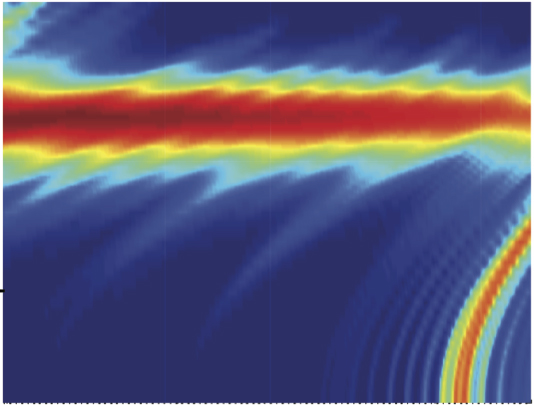 A tight-knit group of photon friends, of neighboring nuclear birth,
Started on their journey towards our spinning earth.

With the break of dawn approaching, the sky turning blue to grey,
They came across a curious crystal near a Massachusetts bay.

At first they thought “We’ve got this, we need no plan of attack!”
But like the mirrored lake adjacent, when they hit they bounced right back.

This was no normal quartz nor opal, though silica it shared,
But layered between tantala, in special stacking pairs.

Hurtling back towards the sky, still not yet quite the dawn of day,
They thought “What’s this black magic? Salem’s twenty miles away!”

The sky had gotten pinker now; the bay began to gleam.
The mirage of shining silver, like Gatsby’s forlorn dream.

The photons tried a second time, now ordered one by one,
With keen coordination, from both lustrous lake and sun.

Again though they would have no luck; the gem stayed dark as day.
(Some flashy blues began to pass, but no one liked them anyway)

Their leader said “just one more try! We must illuminate!
After all we’re photons! Now surely it’s our fate!”

And still the sun was creeping, ever more towards the sky,
Now on the cusp of the horizon, mere moments from the eye.

Then at that subtle second, the angle hit the perfect way,
The sun emerged, so strongly shining, the dawning of the day.

And Tangent to the tantala and silica’s divide,
The photons won their victory, streaming out the other side.

Finally! Transparency! The sunrise shone through bright.
Alas, and in full color, the passing of the light.

The image is the horizontally-flipped experimental data plot from the publication. Lateral position indicates wavelengths of light ranging from 700nm (left) to 400nm (right), and vertical position indicates the incident angle of the light from 0° (bottom) to 80° (top). The colors represent the amount of light transmission from zero percent (dark blue) to 100 percent (dark red). The continuous red band clearly indicates the specific angle at which all wavelengths of light were able to be transmitted, and the red curve on the right indicates that some bluer wavelengths were able to prematurely pass through.